7 Things to Consider When Choosing a Cardano Stake Pool (Updated)

This guide will outline the many factors you should consider when choosing a Cardano stake pool.

Controlling Your Own Stake

Not your keys, not your crypto. You should never use exchanges to store your cryptocurrency long-term (just look at what happened to the world’s largest exchange in 2014). This is doubly true for using exchanges to delegate your stake. When you let an exchange stake for you, you are giving up control of your own funds and handing the keys to the exchange. You can maintain control of your ADA by using a Cardano wallet, such as Daedalus, Yoroi, or AdaLite.

This is the most important metric to evaluate. Your ROS can take a huge hit if the pool you have delegated to is missing the slots they have been scheduled for. Pools only receive rewards for the blocks they mint on the blockchain. Poorly maintained pools will tend to miss opportunities to mint blocks, causing the total rewards paid out to stakers to decrease.

A minor consideration is the hardware a pool runs on. If the server has insufficient resources, they can get bogged down with keeping up with the tip of the blockchain (or even crash) and miss out on minting blocks. Additionally, if a pool runs on a dedicated server at the operator’s house, it is susceptible to power outages. Even if the server runs on an uninterruptible power supply (UPS), their local internet service provider equipment can go down, rendering the pool inoperable for a period of time. Large cloud computing providers, such as AWS and DigitalOcean, provide servers in multiple availability zones, so that even in the event of widespread power outages, pools can remain operational if they have backups in another zone.

Overall, pool performance can be a hard metric to evaluate. As explained in the previous section, a small pool can have wild swings in the number of blocks they create. So if a pool had a low ROS during an epoch, it does not necessarily mean it is performing poorly. You must evaluate a pool’s performance over many consecutive epochs to get a feel for their overall performance. This makes a pool’s transparency very important, as we’ll explain later.

Supporting decentralization is critical to the long-term success of the Cardano network. In order to make sure the blockchain continues to run reliably and with integrity, we need to maintain a healthy distribution of stake across many stake pool operators. You can help by not delegating to groups that control a large number of stake pools, such as Binance:

Since determining how effectively a pool is running based solely on ROS is very difficult to do, pools that openly provide performance data should be given serious consideration for your stake. For example, PoolTool provides the ability for stake pools to self-report the slots they get elected for at the beginning of each epoch. These reports are then evaluated against the actual blocks the pool produces, and PoolTool publishes both of these values on the pool’s page. This provides real measurements of a pool’s performance over time.

For example, we post regular pool updates to our telegram channel, so delegators can easily stay up to date on our performance. The team is always available for comments, suggestions, or questions.

To maximize the rewards you earn, you will want to choose a pool with low fees. There are two types of fees stake pools charge: fixed fee and margin. The fixed fee is an amount of ADA taken from the total rewards the pool produces in an epoch (epochs last 5 days). Note: this is not a fee charged to each delegator.

Margin is a percentage taken from the pool’s total rewards each epoch after the fixed fee has been deducted. These fees go to the pool’s operators to cover the costs of running their pool (more on this later).

As an example, let’s break down the rewards payouts between two pools with the same amount of stake for a hypothetical epoch:

If each pool earned 20,000 ADA in rewards during an epoch, the rewards would be distributed as follows:

Beware of extremely low-fee pools, like those charging 0% margin. Pool operators can change their fees at any time, and pools with fees that seem too good to be true are likely to raise their fees after they fill up their pool.

Pool rewards need to be considered as averaged over time. A smaller pool will divide bigger shares of the reward amongst its stakers (since there are fewer of them), but they will statistically get chosen to produce less blocks. A larger pool will find more blocks but payout smaller rewards. As long as the bigger pool isn’t saturated, the rewards will be the same over time. Also, since it is a random selection, some pools may have good or bad luck “streaks”. For example, the Cardano network has targeted about 4.6% rewards (Return on Stake, or ROS). Large pools will tend to pay out more consistent rewards, as there is lower variance in the number of blocks they mint per epoch. Small pools will have much more variation in the amount of blocks they produce per epoch, and so the rewards will vary significantly. Across three epochs, a small pool may payout 1%, 9%, and 4% ROS, but over time the rewards will average out to 4.6%.

This is important to remember when looking at pool performance over a short period of time. A small pool may get “lucky” on their first few epochs and get selected for many more slots than average. They will appear to pay out a much higher ROS than other pools. However, after several epochs, this will even out to the expected ROS.

The following graphic illustrates the breakdown of pool fees (more on this later) based on pool size and the small overall effect they have on overall ROS: 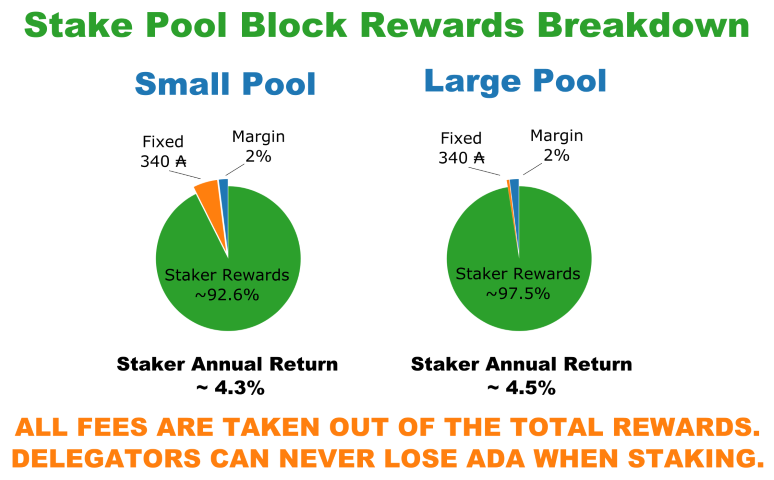 Pledge is the amount of ADA the pool operator(s) have staked in their own pool. This effectively lets delegators know how invested the operators are in the success of the pool. Pledged ADA earns rewards just like if it were staked, so if a pool goes down, its operator will not only miss out on collecting fees for the missed blocks, but they will also lose rewards on their pledge.

Pledge also has a small effect on the rewards earned by the pool’s delegators. This is called the pledge influence factor, which is currently set to 0.3. The overall effect of pledge is very small on the ROS a delegator will earn. Compared to a pool with 0 ADA pledged, here are a few examples of how much more a delegator can expect to earn:

Based on these values, you can see that it would be better to stake your ADA in a pool with 0 pledge and a 2% fee than a pool with 12M ADA pledged and a 3.5% fee. Fees and pool performance are a much bigger factor in your expected returns than a pool’s pledge, as we explained in the previous section.

If I spend or add funds to my wallet after I delegated to a pool, does the staked amount change automatically?

Yes - when you delegate to a pool, you are delegating your entire wallet - not just a fixed amount. So if funds are added or removed from your wallet, you staked amount will change accordingly.

If I delegated to a pool during the Incentivized Test Net (ITN), do I need to redelegate for Mainnet?

Yes - in fact, you will have 2 wallets that need to be delegated. You will need to migrate your original Byron-era wallet to a Shelley wallet. Additionally, your ITN rewards are paid out in a new wallet, which you can recover using the recovery phrase generated when you created your ITN wallet. Check out our Daedalus staking tutorial for more details.

Why does it take two epochs to earn rewards?

Slot leaders are elected at the start of each epoch, so the stake in the prior epoch is used to select leaders. Then the epoch must commence and each pool must show up when it’s their turn for a slot. After the epoch has ended, all the pools will have produced the blocks assigned (or missed them), and rewards are calculated. The rewards are then paid out on the following epoch.

Do only big pools get selected to make blocks?

No, they only have the best chance statistically. A pool with only 10 ADA in it could get selected, only its chances are extremely low. Over a very, very long period of time, this pool has the opportunity to earn the same amount of rewards as a pool with 10M ADA, but it will take much longer to even out.

No, the k parameter only means pools will saturate at 0.2% of the total staked ADA. People can still delegate to over-saturated pools, and there can be any number of unsaturated pools. Basically, it just means only up to 500 pools can operate with the maximum amount of stake and not be saturated.

Is my ADA locked when I delegate to a pool?

No, you are free to spend your ADA at any time (although you will stop earning staking rewards on anything that you spend).

If you have questions about staking or anything else related to Cardano, feel free to join our Telegram channel. Follow us on Twitter and Reddit to be notified of future posts! 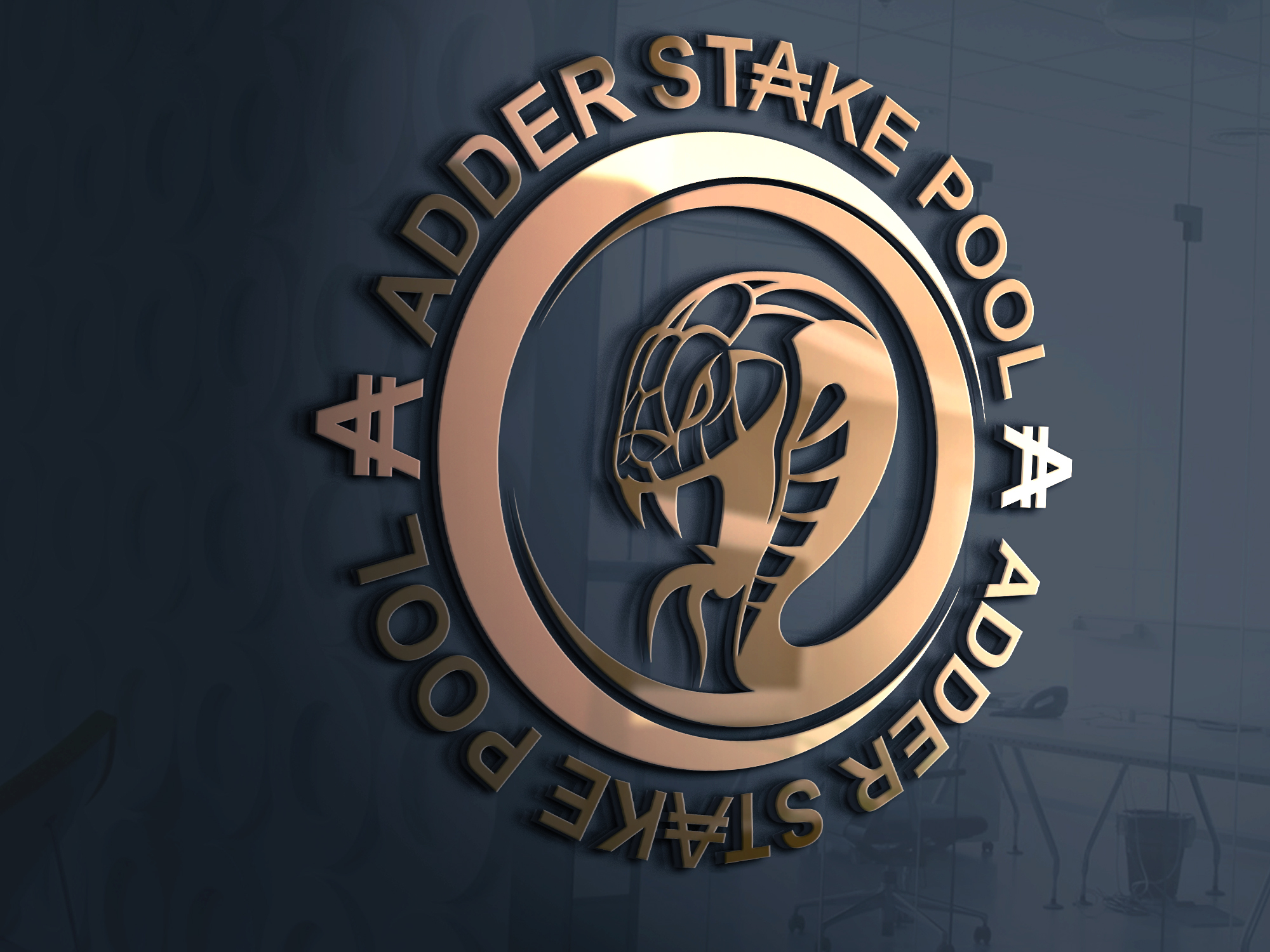 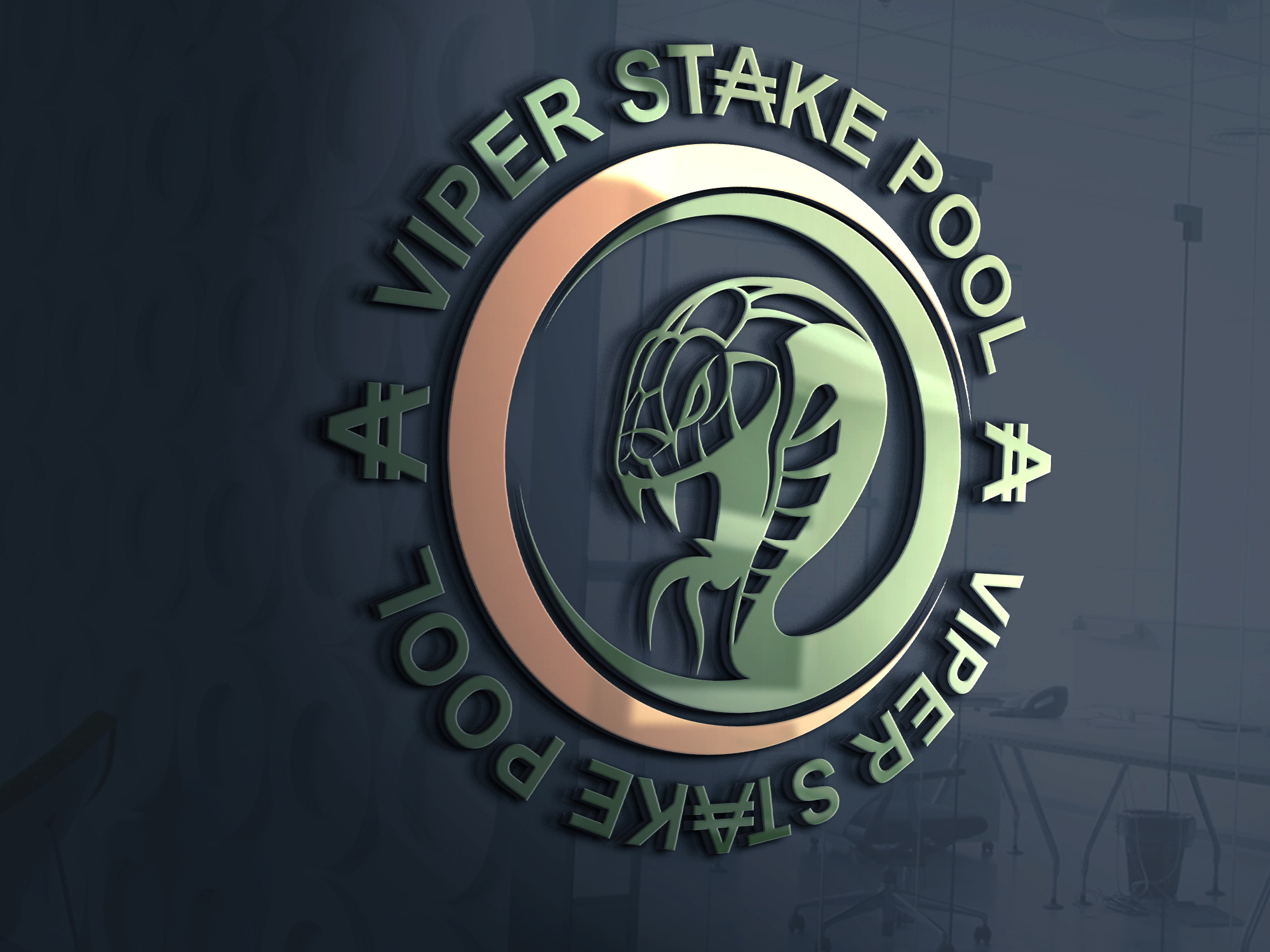 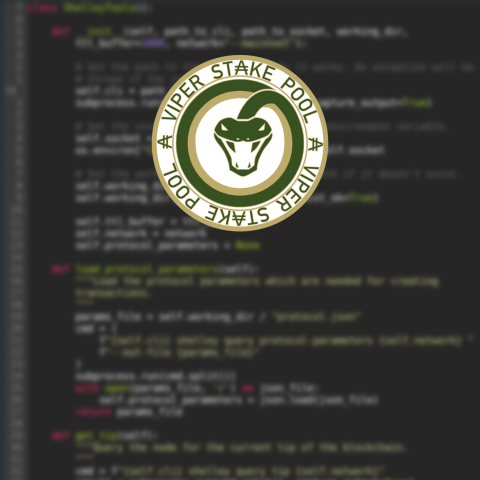